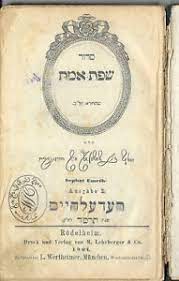 Elsewhere, we have written extensively about the implications of the closing phrase of the kedushas hayom within the Shabbos Amida.

The firm halachic foundation and history that this nusach stands on was covered in the very first volume of Rabbi Hamburger’s Shorishei Minhag Aschkenaz over 20 years ago. Then I recently gave thoughts about the difference between saying Mikadshei and Ohavei.

Now, I would like to elaborate on the difference between saying veyanuchu and veyismechu – based on a novel P’shat I had many years ago on a verse in Megilas Esther, which follows. At the end of the P’shat you will see how the idea is clearly true and was understood by our most famous paytanim.

The Medrash interprets this:

The Medrash connects each word to a different mitzvah. If we look at the four mitzvahs mentioned -Torah, Yomtov, Milah and Tefillin, we notice that two of these are important mitzvahs that are described as an ‘Os’. A sign.

Each Jew has two signs of his Judaism that adorn him daily. Tefilin and Milah. On Shabbos when there is no Tefilin, the Shabbos acts as the second sign.

Now, the Medrash does not mention Shabbos, but it does mention Torah and Yomtov. I thought that, perhaps, the rather random assortment of Mitzvos in this Pasuk should have an underlying connection. So I wondered why Shabbos- the third ‘Os’ was absent.

Then it occurred to me that the combination of Torah, with the Simcha of Yomtov, is the essence of Shabbos.

That is because Shabbos is both a day for indulging in Torah, as well as a day of celebration.

After thinking about this suggestion I realized that it has already been echoed in two of our Shabbos Zemiros, which are both seemingly based on the above pasuk.

So Shabbos is described as a day of Ohr=Torah, and Simcha=Yom Tov.

The addition of Menucha in the first Zemer above indicates to me that the dedication to Torah on Shabbos falls under the general term “Menuchah” – meaning that Shabbos is the respite from the toils of the week, which allows for Torah study.

It is also a time to rejoice in Hashem. Both as a respite and as a day of great elevation the Shabbos is a light to the Yehudim.

The two aspects of Shabbos get divided between these two nuschaos – for a reason yet unknown. But the fact that these are two central themes to Shabbos has been proven above.