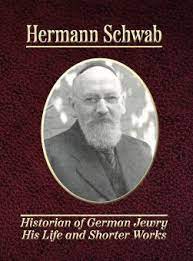 Recently, I had the great pleasure of reading an anthology of the smaller works of the famed popular historian, Mr. Hermann Schwab z’l. “Hermann Schwab. Historian of German Jewry: His Life and Shorter Works” is distributed by Feldheim Books.

For full disclosure, I will mention that for a long time I have had a great fondness for the works of Hermann Schwab. Here’s why:

Mr. Schwab was appreciative of the fact that he was a witness to an early era of the Frankfurt IRG Kehilla and spent his time and ink retelling the story of those early years in a fair and complete fashion.

You see, often history is written in the past tense. Someone in a later generation researches a time and an era that has passed.

But occasionally it is written in the “present”. A chronicler, as it were, can record the happenings and feelings of his own time for the edification of a future reader.

Mr. Schwab did both. He chronicled his times, and the glimpse he had of a time just before his.

But besides the importance of his history, I personally am enchanted by the affection he has for the subject matter. His personal love for his childhood gives the narration the voice of a sweet, aging Opa who seeks to perpetuate his experiences. True to the Opa narration, he has authored several short stories for children which are included in this book.

Yet, as much as he has the voice of an Opa, he is just as enchanted by the loving grace of the sweet aging Opas that he encountered as relays his love of the enchanted German life of both the cities and the countryside. He famously relays an encounter he had meeting an aged Rabbiner Hirsch on the streets of Frankfurt, and vividly recounts the awe and charm surrounding that Gadol.

A writer of history can have a fondness for the history he records if he is open about it, and still seeks to relay the events as they happened. As in Hermann Schwab’s works, this fondness makes for an enjoyable read, as the reader can see the events from the perspective of one who lived them and with his emotions.

At the same time, Hermann Schwab’s writings are a popularly quoted original source in many serious scholarly works dealing with German Jewry in the modern era.

A professor of mine, Dr. Judith Bleich, strongly feels that Mr. Schwab’s recounting of the controversy regarding secession (Austritt) is one of the most balanced accounts on the topic.

This is certainly an unfair, inaccurate, and overly simplistic portrayal of Rav Hirsch.

Hermann Schwab avoided that entirely, while, at the same time, giving a balanced account of the affair.

The works most often quoted are Mr. Schwab’s larger works They include: “The History of Orthodox Jewry in Germany” (1950), “Jewish Rural Communities in Germany” (1956), “Chachmei Ashkenaz” (1964), and “A World in Ruins” (1946)- most of these I was lucky enough to acquire through used book dealers – sometimes for over 50$.

Recently, his granddaughter, Naomi Schendowich, who translates books from German by occupation, has brought forth a collection of articles, Eulogies, letters, and short stories, some of which have never been made public, others that were in assorted journals and newspapers, but confined to the German language.

In his eulogies, he paints for us some figures of importance who would otherwise be left unknown to most of the public. In portraying their saintliness and importance, he doesn’t fail to bring out the beauty and the serenity of the lives they lived- sometimes in quaint places of yesteryear. So, we learn of the Klaus Rabbiner of Halberstadt, who sits up late at night pondering a Talmudic question and runs to his rebbe’s house to deliver the answer despite the late hour. But we also learn about his love of nature and the short strolls he allows himself in the Klaus garden, where he ponders the beauty in the trees and the birds that are familiar parts of his daily life.

Hermann Schwab’s love for the bliss of his childhood and his enchantment with the countryside and its villages is conveyed with love.

And much like his description of Rabbi Joseph Noble, who was soft and unassuming, but whose eyes could light up in passion when faced with protecting the honor of his religion, Hermann Schwab displays both sides- such as is portrayed in the text of the speech he gave on the anniversary of Rabbiner Hirsch’s 100th birthday, or the article he wrote in defense of Moreinu Roseheim zt’l.

In short, aside from being an important, much-quoted historian, Hermann Schwab embodied many of the attributes he saw in the people he saw worthy of documenting for the ages.

I would greatly like to see the reprinting of his larger works (even though that would devalue my collection), but, in the meantime, this book is an important piece of our history.