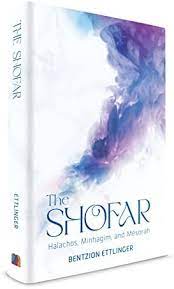 I have been going through the book “The Shofar”, by our Kehilla’s ba’al toke’a, Rabbi Bentzion Ettlinger. It is a good read and a carefully written kuntres, as he describes it within. It is also comprehensive, and thorough, and bears the mark of years of experience.

(I found the discussion about eating before Tekios most fascinating.)

He does mention our minhogim, and things he has heard from our rabbinate (specifically Rav Schwab zt’l who he faithfully was meshamesh for many years)– but does not give our minhogim more attention than other minhogim, true to form –as the sefer is not about “us”. But the names of Rav Schwab and Rav Hirsch are present enough to give a bit of Kehilla flavoring.

About twenty years ago, when I would submit articles to local Jewish newspapers as a hobby, I wrote a short piece about various minhogim in shofar blowing. (Full disclosure: I can’t blow a shofar.) I spoke to Rabbi Ettlinger, among others, in compiling the piece. At the time I was interested in a small nuance in the wording of the poskim. (Though. Now I can’t find it, except for in Mishna Brurah 590;21) You see, when describing the Makri’s conducting of the shofar blowing, poskim mention that he calls out “shevarim”, and as the shevarim sounds he calls out, “teruah”. This seems controversial since hearing his instructions at the same time as he blows might be an interruption for the makri or the tzibur.

In the article (here) I mentioned that this has fallen out of practice. I believe it was actually the practice in KAJ and was stopped- (perhaps by Rav Schwab? ) I need to confirm this, but it is yet another example of a forgotten practice that appeared only on the pages of the seforim and in our shul.

I believe our Shul has the custom – and perhaps this is ubiquitous- that the Tashrat sets that are done in one breath are indicated by the makri heralding tham in one phrase, while the two-breath Tashrats are heralded with the makri calling teruah after the shevarim was already blown. This is the practice in the Spanish Portuguese kehilos as well.

By the way, a friend of mine has launched a blog where he is focused on collectiong and sharing various minhogim: See a post here