Here is a story about a local kashrus scandal that did not involve the fault of any local people, but began at the slaughter house. It was told to me by the then supervisor of shechita Rabbi N. Bernstein. My father added the details at the end of the account.

There were strict controls over the meat slaughtered under KAJ supervision. This included:

plumbahs and tags and wires and  a stamp. It also included inventory logs by the shochtim of how much “meat” came off of their line.

Rabbi Bernstien made note to the committee that there could be no way of comparing the inventory to the meat on the shelves for meat sold in supermarkets or stores not under the KAJ hashgocho.

The committee replied that they have no responisbility for what is sold elsewhere or for the claim that it is “our” shechitah. (This is obvious if but for the fact that there is no jurisdiction over the end retailer.)

But, it came to light that even in the stores under our hashgocho the inventory exceded the amount of meat coming off the line.

Rav Schwab immediately called for a new stamp to be produced that was just an eighth of an inch smaller than the old one – which had obviously been compromised.

Next, he called for all of the shochtim to not show up at the shlachthause out of protest and to cut the supply chain. The owner called Rav Schwab and yelled, “Where are your shochtim! Why didn’t they come in! We are losing a day of production!”

Rav Schwab was furious and replied, “You don’t know why they didn’t come in? You know, because you are the reason!”

The owner of the shlachthause protested – since there was no “evidence”.

The kehilla immediately staged a raid at 5 a.m. when the supplier made his deliveries. The blue van pulled up to the local butcher and the mashgichim descended on it…with my father in tow with his camera equipment to photo the stamp and the questionable inventory.

This was in the mid 1980s and there was aweek without any meat until a new slaughter house could be engaged. My father z’l filmed every aspect of Kehilla life….even the kashrus raids! 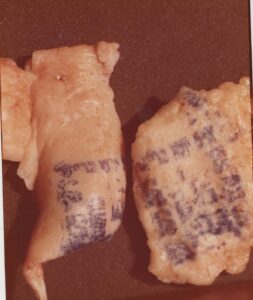 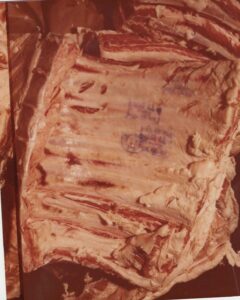 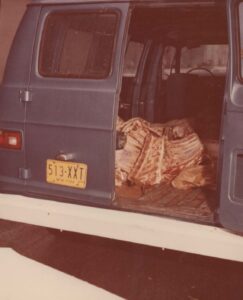