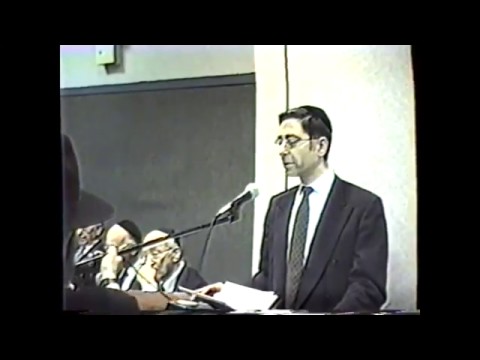 Before I put forth the relevance of TIDE to today’s circumstances, I would like to break into a short history of our community and kollel. I also hope to touch upon the stylistic differences in learning that once existed- and have left their mark.

Rav Breuer had a close talmid- I believe he was a talmid of the Breuer’s Yeshiva (Adas Yisroel) of Frankfurt. He was the beloved Mr. Kurt Neumann  zL. After many years of kovea itim he retired early and joined the Beis Medrash al shem Horav Shlomo Breuer in the 1980s. He was a fixture there. He had a beaming countenance and really looked at home among the Beis Medrash bochrim.

His son learned in Philadelphia Yeshiva and Lakewood in the 70s and 80s- later becoming a respected mechanech in the Lakewood cheder.

He once revealed to me the exchanges he had with Rav Breuer as he progressed through the Yeshiva world. On one occasion Rav Breuer asked him how he intended to earn a living. He replied that he intends to be a mechanech. Rav Breuer accepted the answer. On another occasion, after the same exchange, Rav Breuer told him, “I hope you will be good at it- or else I pity you and the pupils!”

In Moreinu Roseheim’s book, “Hirsch’s View on Culture” he writes that in Frankfurt although long-term learning wasn’t in vogue, if a young man had aspirations of joining the rabbinate he was encouraged to head “east” to the Yeshivas of renown. According to this account, the Rav would have been comfortable with the young bochur’s choice. Just skeptical about Chinuch becoming the “plan B” job. (I received a similar line-of-questioning with Rav Schwab z-L.)

The next thing I learned from Rabbi Neumann was that the community in the 1970s had two Yeshivas of choice for the youth; Be’er Yaakov and Kol Torah. Both of these Yeshivas had German-Jewish influences via Rav Kunstadt in Kol Torah and Rav Wolbe in Be’er Yaakov. But more importantly these Yeshivahs were in Israel which meant that when the year or two ended, the bochur would return to the community and begin college. This plan is not nefarious. It made sense. But as one or two parents chose to send to Lakewood satellites such as Philly or Scranton, the understanding was that there would be no immediate return to college. This marked the beginning of a trend, though it would take a decade to stick. It wasn’t welcomed by all of the parent body of the neighborhood.

I heard the following story from a mashgiach of mine in Israel- who attended Be’er Yaakov in the 1970s. There was a Yekkish bochur who was excelling. It came time for him to return to his family and college. The other bochurim prepared a seudas preidah. They invited Rav Wolbe to speak- despite knowing that he was generally dissatisfied with the return of this bochur.

Rav Wolbe appeared at the party,  and, instead of speaking, he got up, turned to the young bochur, and screamed, “YOU ARE KILLING RABBI AKIVA EIGER!!!” (Meaning he is killing his potential to be a gadol be’Torah.)Rav Wolbe stormed out, the assembled ended the seuda at once and bentched.

This is a grey area where TIDE and TO cannot co-exist. Real, unadulterated TIDE would say that the Beis Hamedrash is only one sphere of the avodas Hashem. But, ultimately, “Shesulim biveis Hashem, bechatzros Elokeinu yafrichu.” (It is hard for me to write this because roads not taken are particularly frightening to me.) TO would say, “You are killing Rabi Akiva Eiger!”

To remove some of the shock, I must point out that the Hungarian and the Chasidic communities also share the view of an expanded role in avodas Hashem. A rebbe of mine would spend much time in Williamsburg when non-Chassidim lived there too. He watched two chavrusos- young chassidim- sit for hours a day in a shul. He saw them cover whole mesechtos and large swaths of Shulchan Aruch together in depth. They had the original Chassidic mode of learning in quick pace and with an eye to Halacha. He was convinced that he was watching two future poskim in the making. Until…they both went out to the business world one day. In the world of TO this would be scandalous!

I personally – while learning in the Mir Kollel in Brooklyn had many Chassidic friends. They were engaged in  prolonged years in Kollel per the Yeshiva style. But occasionally there were Chasidim who did not adopt the Yeshiva mode. In Yeshiva, when one leaves to pursue a career he leaves quietly and gradually. Once, a very serious kollel-chasid greets me in the morning as I enter the Beis Hamedrash. He tells me that he wants to say farewell as the next day he will be starting a new job in a hardware store. He says this without any hesitation. And I, frankly, was embarrassed for him. But he knew the way of his community better than I thought I knew it. He was confident that his mission was to be where he needed to be even if it were to drastically change from shtender to cash register from one day to the next. It defied decades of my training- regardless of my ability to explain it.

Now one more nugget from Rabbi Neumann that is astounding in understanding how close we were to an ancient life when Rav Breuer was among us.

Rabbi Neumann came home from Yeshiva one bein hazmanin and Rav Breuer asked him what he is learning. He told him that they were in the middle of a piece by Reb Chaim Brisker. He proceded to tell the Rav the question and then the answer. The Rav, who according to his chavrusah and grandson David -see 20th yahrzeit video- was an expert in chasam sofer, shut chasam sofer and sefas emes on shas- was not able to comprehend the question nor  the answer! This is not written to chas veshalom belittle the Rav. What we have here is a time traveller. The Brisker style of learning was so new that the generation of Rav Breuer and perhaps other Hungarian rabbonim were never exposed to it’s style of analytics. In the previous derech, a question of a tosafos was answered by another tosafos and multiple sugyis were compared to create new questions in the style of the tosaosts themselves. Don’t believe me. Learn a piece of Shagas Aryeh and prepare to become dizzy.

If we could import a talmid of the ksav sofer and replant him in 1970s Philly – this is what would happen. It is reminiscent of Moshe Rabenu not understanding Rabi Akiva, famously.

To drive this home further there is a piece of Torah in Rav Breuer’s sefer ( Divrei Yosef) dealing with a well-known machlokes between Abudreham and Taz. It is hard to understand, to the extent that it seems to be missing a paragraph. Some of the Breuer grandchildren considered using it as bar mitzvah drashas, but couldn’t decipher it.  It, too, might belong to another rabbinical era with its own parlance.