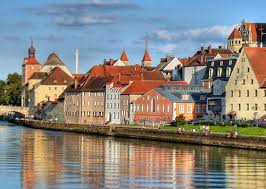 Rabbi Aharon Kahn, a rov whose shul I am close to in Brooklyn, and a Rosh Yeshiva in RIETS, tells the story about his rebbe, Rav Joshe Ber Soleveitchik, one of the greatest Torah scholars of his generation and a chochom in many disciplines. Rav Yoshe Ber, while studying in Berlin, davened Yom Kippur at a local shul and was taken aback by the seemingly triumphant tune used for the Al Cheyt. When he confronted the rabbi there, he was told not to question the use of this tune, as it dates back to the time of the Tosafists!

Rabbi Kahn suggests that the vidui confessional of Yom Kippur is not of the same nature as the confessional of a private individual who is repenting. A private repenting requires much remorse and sorrow. The public repenting does too, but, at the same time is a communal service.

Thus, perhaps the use of a tune for the confessional implies that we are simultaneously happy to have a day of atonement and rid ourselves of the sins. Even sins for which we have already repented are recounted on Yom Kippur to effect a greater atonement- evidence that this is a purification process and not solely an act of repentance.

While KAJ  doesn’t sing Al Cheyt, they do sing Ashamnu. And, per the rabbi in this story, the minhag is medievally Ashkenaz.

Two other remnants of the minhagim of the Tosafists – besides their lengthy piyut contributions- include:

So as we approach Yom Kippur let us remain cognizant of the special place we occupy as the descendants of the world of Torah that once flourished upon the banks of the Rhineland in ancient communities of faithful Jews. May their merit stand beside us, and may our deeds be worthy of our tradition. Gmar Tov.

Sukkos. A Lefty’s Quandary and the Maharil.