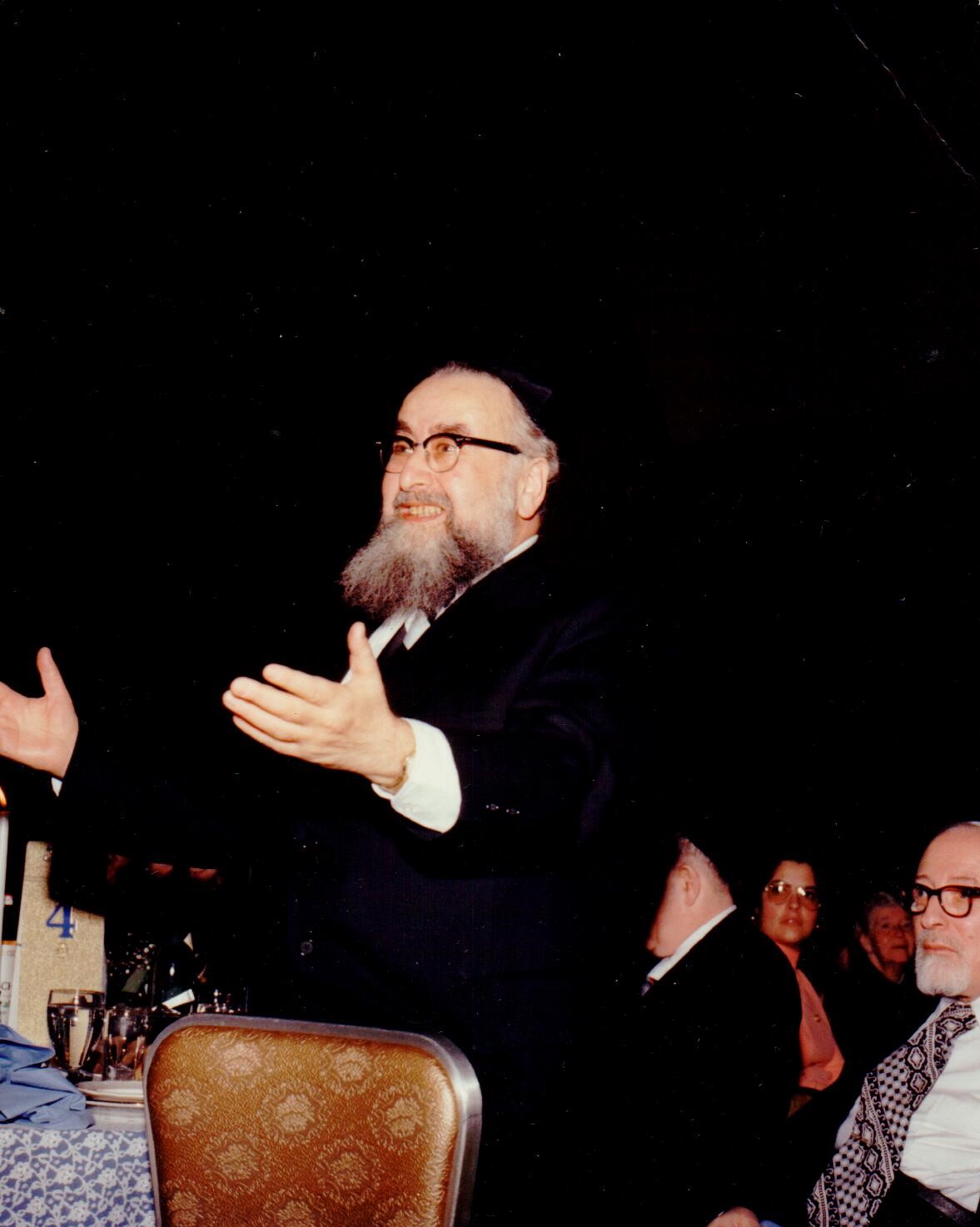 This year Rav Schwab’s Yahrzeit falls out on Purim Katan, as it was the year he passed away. I want to share a few ideas, memories, and teachings of the Rav zt’l that come to mind today.

Since I was a young boy my father z’l would bring me to the Mishna Berurah shiur of the Rav on Shabbos afternoons. I was not usually tuned in, but, instead, looking around at the Rav and the attendees. I do not regret one minute of those afternoons.

Rav Schwab was that! He was so kind and friendly, yet there was a feeling that he was larger than life. He was a G-d fearing person and you would feel ashamed if you knew he would not approve of your actions.

His grandson related the following story. A Yeshivah bochur called the Rav one morning and explained that he came home late from a wedding and therefore slept late and missed minyan. He wanted to know what to daven since the zman was passing. Instead of answering him, Rav Schwab first let him know what he felt about the question. “You are a ganev! Your parents are paying for you to learn in Yeshivah and therefore you have no right to sleep late! You are stealing from your parents!”

A neighbor of mine once called the Rav to complain about the actions of someone in the community. Before she could get very far, the Rav interrupted her and said, “I’m sorry, but what you are telling me is Lashon Horah.” (I assume it didn’t involve a danger and was beyond his control or duty.)

When I began Yeshivah after High-School, I asked the Rav if I could come over and speak to him about my future. I told him I wanted to learn and eventually teach. He told me the following: One who wishes to go into Chinuch needs to take smaller jobs at camps, and youth programs in order to see if he has good rapport and control over students. One should not enter this occupation and learn by trial and error, lest he ruin the students and waste their time. (It is for this reason that I have been teaching English in the Yeshivahs for the past few years. It is my way of keeping a foot in Jewish education until I decide if to make it the thrust of what I do. This turned out to be a bad idea, incidentally, since the behavior of Yeshivah students is significantly worse during the afternoon hours, and the job is not rewarding.)

Rabbi Kalman Krohn z’l related: The Rav was giving a shiur in shul and it was hot. An attendee asked if the Rav would mind if he removed his jacket. The Rav responded, “I don’t mind if you don’t remove your jacket!”

The Rav was once called and asked to sign a letter on behalf of a yid who was facing jail time. The Rav said, “He is a rodeif. He endangers all the yidden in galus by getting into trouble. He needs to sit!” Other times he commented about yidden in trouble with the law saying that it is a chilul Hashem that they wear such pious garb in their state of shame. “They should shave the beard and peyos (remove the yarmulka? perhaps ed.) before they come to court!” (Heard from members of the Rav’s family)

One year a grandchild of the Rav – a yeshivah bochur at the time- visited him shortly before Purim. The Rav made him promise that he would not get drunk on Purim. (The joke goes that the next year he made sure to visit only after Purim!)

These are gedolim stories. But not about avodas Hashem, (which was not a small matter to the Rav either,) but about living a principled life. It is in many ways harder than avodas Hashem. It requires that you serve Hashem and not skip the dotting of one “I” or the crossing of one “t” along the way.

Finally, I would like to make a point. On Rav Schwab’s gravestone he had the following pasuk written (Mishlei 28:13):

We don’t know why he chose this, but it would seemingly be a life lesson he wanted to share with all who came to pray there. It is a call to Teshuvah. But in a unique way. This Pasuk calls for a person to be honest with themselves. It follows the path of the lessons he taught throughout his life. Be straight and honest with others, and most of all with yourself!

( To digress, it occurs to me that he also wanted to mention his rebbe’s name on his kever as a merit: The famed mashgiach of the Mirrer Yeshiva Rabbi Yerucham Levovitz zt’l- whose name is the last word of that pasuk.)

The Words We Use: Preserved Judaeo-German